A Much Healthier Local Resident After Dedication To Improvement 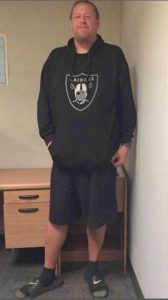 Need some inspiration for your New Year’s Resolution to a better and healthier you? Meet Mother Lode resident Kris Olson.

Olson was Wednesday’s KVML “Newsmaker of the Day”.

One year ago, Olson wanted to change his life. He was out of shape and feeling bad.

At nearly six foot six inches, Olson weighed a total of four hundred sixty pounds. It was difficult for him to sleep, breath and simply walk across the room.

Without a personal trainer, Olson decided to begin doing his own research. He purchased a fitness tracker, watched a show called “Extreme Weight Loss” and studied nutrition.

“I learned to stick to the outer parts of grocery stores. That is where the natural food is found such as fruit, vegetables and produce. The aisles are where processed food is located.” said Olson.

“I live in Copperopolis”, said Olson. “There are numerous trails and paths to hike on throughout Copperopolis, Jamestown, Sonora and well beyond. Last Summer I spent a large amount of time hiking to various locations in the Sierra Nevada.”

Olson hikes an average of five miles per day. It was difficult at first, but he was dedicated to himself.

“Additionally, I took up both swimming and paddleboarding.” said Olson.

It also helped that Olson has numerous friends who continued to encourage him throughout the year. Olson would post his latest results on social media and the feedback was filled with positive comments and those saying that they were personally inspired by Olson’s dedication.

There was a bit of negative feedback as well, with some friends claiming that what he was doing on his own was dangerous. Olson would reply, “You never told me it was dangerous when I was eating cheeseburgers.”

So what are the results after one year of personal dedication and improvement?

After 365 days, Olson has gone from four hundred sixty pounds down to two hundred eighty five pounds. This is a total of 175 pounds lost!

Olson has hiked a total of 1,840 miles. All this without one single hour spent in the gym. His diet includes lots of cold pressed juice.

His message to anyone who wants to improve themselves. “Find out what works for you and stick to it. Take one day at a time. Each day is a small victory with the focus on the major victory, so stay consistent and do not give up or stop.”