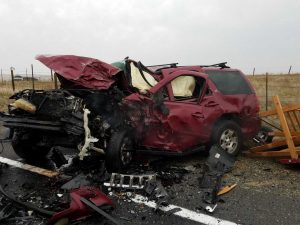 The CHP has released the names of those involved in a tragic fatal crash on Highway 108/120 near Lancaster Road.

Pulido notes, “Mr. Laverone was unable to take evasive action to avoid a collision and the vehicles collided head-on. Mr. Gonzales sustained fatal injuries and was pronounced deceased at the scene of the collision. Mr Laverone was pinned in the vehicle and was extricated by emergency personnel. He was transported to Memorial Medical Center in Modesto to be treated for major injuries.”

Officer Pulido says it is unclear what caused Gonzales to lose control of the Jeep, and an autopsy is pending. Highway 108/120 was closed for approximately two-and-a-half hours while the collision was cleaned up and investigated.