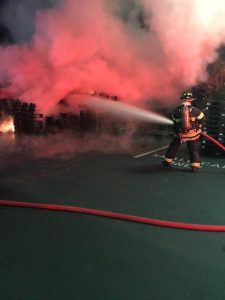 Sonora, CA — The Sonora Police Department arrested a man that allegedly set several pallets on fire behind the Walmart on Sanguinetti Road.

The fire occurred during the early morning hours over the weekend and it was determined to be “suspicious” in nature. Fire personnel extinguished the blaze and soon  began investigating the cause. Police officers reviewed Walmart’s surveillance video and saw 32-year-old Aaron Eugene Jolley intentionally start the fire. Later in the day Jolley was located by officers and booked into Tuolumne County Jail on a charge of arson. It is unclear why he allegedly ignited the fire.