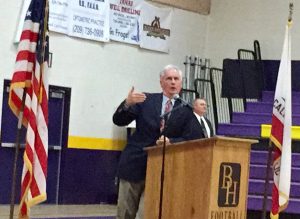 Sonora, CA — Mother Lode Congressman Tom McClintock’s bike bill makes it out of committee and heads to the house floor.

H.R. 1349 authored by McClintock was passed by a 22 to 18 vote in the House Natural Resources Committee Wednesday.  The congressman details that his bill would restore to federal land managers the option to permit non-motorized mountain bikes, adaptive cycles, strollers and game-carts in Wilderness areas where their use is compatible with the environment, trail conditions and existing uses. He points to the fact that bikes were originally allowed when the Wilderness Act of 1977 was enacted. The congressman argues after that when federal bureaucrats began adopting blanket prohibitions against their use, they closed wilderness areas that are now equivalent to the entire land area of California.

McClintock indicates his goal as Chairman of the Sub-committee on Federal Lands is to restore public access to the public lands. He notes the measure has support from the Sustainable Trails Coalition.

Below is McClintock’s entire speech at the Natural Resources committee hearing:

Thank you for scheduling my bill, H.R. 1349 for markup.  This bill was brought to me by the Sustainable Trails Coalition and advances one of the principal objectives of the Federal Lands Sub-Committee: to restore public access to our public lands.

Specifically, this bill will restore the original intent of the Wilderness Act to allow bicycles in wilderness areas.  People who enjoy mountain biking have just as much right to use the public trails as those who enjoy hiking, packing or horseback riding, and our wilderness areas were never intended by Congress to prohibit human-powered mountain bikes.

In fact, a year after he signed the Wilderness Act of 1964, Lyndon Johnson said, “The forgotten outdoorsmen of today are those who like to walk, hike, ride horseback or bicycle.  For them we must have trails as well as highways.”

When the House considered the Wilderness Act in June of 1964, the record is clear that its framers intended that the term “mechanical transport” be applied to non-human-powered vehicles like motorcycles – not human-powered devices like bicycles.  The Forest Service built this understanding into its original implementing regulations by explicitly allowing all forms of human-powered travel in Wilderness areas.

Bicycles were allowed in wilderness areas from the inception of the Act in 1964 until 1977, when the Forest Service reinterpreted the act to ban them.  This met with a stern rebuke from Senator Frank Church, one of the key sponsors of the Wilderness Act, who protested that “the agencies are applying provisions of the Wilderness Act too strictly and misconstruing the intent of Congress as to how these areas should be managed.”

In 1980, Congress explicitly listed bicycling as a permissible use when it established the Rattlesnake Wilderness in Montana, and the Forest Service then rewrote its regulation for that area to allow bicycles unless the local forest manager banned them.   In fact, Congress, which has sole constitutional authority over the public lands, has never voted to ban bicycle use in Wilderness areas, and its consistent precedent has been to allow them.

A continuing maintenance problem in Wilderness areas is underutilized trails that disappear with disuse.  Restoring bicycle access to our wilderness areas means that fewer trails will disappear over time.

In addition, trails maintenance is significantly hampered by the current ban on wheelbarrows – H.R. 1349 specifically allows them.

There has been a lot of misinformation over the effect of this bill.  It only removes the current blanket prohibition against bicycles and other forms of human-powered locomotion established by bureaucratic regulation.

Let me make this very clear: It in no way interferes with the discretion provided in other regulations and laws that gives land managers the ability to close or restrict the use of trails according to site-specific conditions.  These agencies have always had authority for example, to prohibit access if a trail is damaged or is incompatible with other uses, and that authority is undisturbed by this law.

We set aside our public lands, in the words of the original Yosemite Charter, for “public use, resort and recreation.”  This bill restores this principle for America’s mountain bikers on our public lands.