Update: Here Comes Santa Claus For A Good Cause 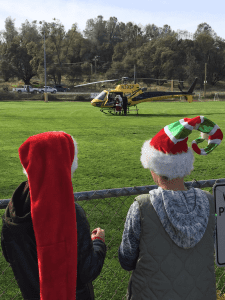 Update at 12:15 p.m.: As Santa arrived without a hitch to greet over a hundred cheering kids waiting for his helicopter to touch down at Standard Park, the 2017 Interfaith Coat Drive was setting a new record for coat donations.

To view Santa breezing in and setting his boots onto the ballfield to welcoming shouts, click here.

Well over 1,100 coats were counted early in the 11 a.m. hour as Santa was landing. At 12:15 the number had risen to over 1,200. Those unable to make the event are encouraged to bring new or gently used coats to Interfaith Community Social Services (18500 Striker Court, off Tuolumne Road West of Standard Road, Sonora) weekdays between 10 a.m. and 1 p.m.

To view photos and video from this morning’s event, click into the image box slide show and/or video.

Original Post at 8:01 a.m.: Sonora, CA — Grab the kids and head to Sonora’s Standard Park to see Santa fly-in — not on a sleigh but a helicopter.

The public can help others by bringing new or gently used coats to donate and girls and boys can sit on Santa’s lap and tell him what they want for Christmas. Star 92.7 and 93.5 KKBN will air the event live. The Santa Fly-in and coat drive runs from 9 a.m. to noon.

Additionally, the on-air Clarke Broadcasting’s Interfaith Cash Drive set a record on Friday rising over $102,000 thanks to the outpouring of community giving and a match by Chicken Ranch Rancheria. In the continuing tradition of giving that Tuolumne County is known for, around $51,000 poured in and as promised Tribal Chair Lloyd Mathiesen announced that figure would be matched dollar for dollar by the Chicken Ranch Rancheria, bringing the total to over $102,000.

Cash donations can still be made by clicking here or going to the homepage of myMotherlode.com and clicking on the donation tab at the top of the page.