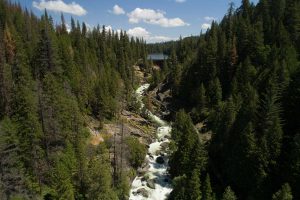 Sonora, CA — As part of a local water district’s plan to pay for significant capital improvements the third in a series of five rate hikes is set to take effect in January.

This week, postcards are arriving in mailboxes from Tuolumne Utilities District (TUD) as a reminder for customers to brace themselves. According to spokesperson Lisa Westbrook, despite the fact that the rate increase plan, which extends through 2020, was adopted in late 2015 she still hears “lots” of customers who receive the notices insisting that they never heard of it before. She surmises, “I think there is still some sticker shock.”

Westbrook estimates that residential customers, a good many of which are on the district’s smaller sized meters, will pay roughly $4 per monthly or $8 per bimonthly bill, although it will also vary by water consumption level. TUD’s water and sewer customers are billed every other month while those just on the sewer line are billed monthly. The funds are specifically earmarked for the district’s Capital Improvement Plan.

This year the district applied the monies towards completing its Gold Springs Sewer Force Main and Gravity Sewer Replacement projects. “Those two projects were critical for the Columbia area — we are having a lot of issues there,” Westbrook recounts, adding that the two projects totaled about $810,000. Further illuminating the district’s infrastructure needs, Westbrook continues, “The district is looking at various water and sewer projects and using the funding that is being received to put into either pipe or tank replacement. We have a lot of water lines that are over 75 to 100 years old that need replacing, so we are putting money back into the system.”

In 2018 the district will be tapping the funds to continue work on its multi-year Sonora Distribution Improvement Project that targets improving some of the old water mains existing in the City of Sonora, which Westbrook says will total over $1 million. Too, she points out, “We are continuing to working on the Phoenix Lake Restoration Plan…[another] ongoing project…and that total is $6.1 million.”

As reported here, much of the funding for the Phoenix Lake project was obtained through grant funding, which Westbrook credits as a way for the district to further stretch its dollars. “The district constantly looking for any funding available for the system improvements,” she stresses, noting with obvious pride that since 2014 the district has been able to garner over $13 million in grants.

For the latest version of TUD’s Capital Improvement Plan, which is updated monthly, click here.