Love Or Loathe Them, More Cell Tower Projects Are Cropping Up 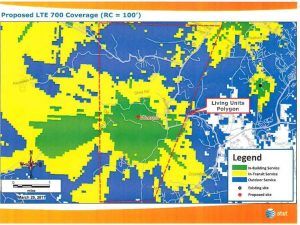 Sonora, CA – An appeal filed this week over a cell tower permit may provide Mother Lode residents hankering for more high-speed IT connectivity food for thought as to where towers should be allowed.

Clarke Broadcasting interviewed Tuolumne County Community Resources Agency officials over the Planning Commission’s review and 4-1 approval at its Oct. 4 meeting of a conditional use permit application for the cell tower project planned for location on a rural residential (RR) zoned parcel within Jamestown’s Heavenly Hills subdivision. AT&T, locally represented by Epic Wireless, which is involved with several local cell towers, and landowners Elizabeth and Bruce Beaudreau are the applicants.

County staff in its project review recommended approving the conditional use permit as it will ostensibly provide improved communications for the Jamestown area residents as well as other southwestern county users of the utility. The closest existing major telecommunications facility, according to the project review, is nearly four miles from the proposed site. Too, goals and policies within the General Plan support improving infrastructure and state of the art communications facilities to increase the county’s marketability. The environmental evaluation found it CEQA exempt as it is a utility extension and construction involves grading on land with less than a ten percent slope.

Among 28 specific conditions staff required the design to incorporate anti-climbing features and earth-tone colors that blend with surrounding vegetation. Construction constraints include limiting site activities to weekdays from 7 a.m. until 7 p.m. and doing dust abatement water-sprays.

Speaking on behalf of Tuolumne County’s Community Resources Agency, Assistant Director Quincy Yaley discusses an appeal filed early this week that has kicked the matter over to the county board of supervisors, which must hear and make a ruling on the project within 45 days. Filed by Raul Vaughn, a homeowner in the project vicinity, it carried an addendum by Mother Lode Internet CEO Ben Hulet.

While Yaley and her colleagues are still reviewing the appeal, she shares that the letter claims that notice of the project going to the commission was not received and that the signal maps submitted were not accurate. “There is also a question of co-locating facilities, required by law to allow other cell companies to co-locate on the tower and ‘unfair’ use of public [federal Connect America CAF2] funds [related to] a mandate not to interfere with or duplicate existing services,” Yaley adds.

CAF2 is a FCC program whose goal is to bring high-speed internet to pre-identified communities that lack infrastructure capable of providing one one-megabyte upload and download broadband service. As Yaley points out, “This area of the county lacks services — and the tower would be filling a service gap.” To view current and projected coverage areas pertaining to the proposed Heavenly Hills cell tower, click into the image box slideshow.

In addition to the appeal, Yaley admits that one of the original creators of the Heavenly Hills subdivision complained at the planning commission meeting that the cell tower project violated its covenants, conditions and restrictions (CC&Rs).

CC&Rs Outside Of County Control

While some residents may find it surprising, Yaley stresses that the county does not have any jurisdiction over CC&Rs. “We don’t regulate or enforce them or provide them to an applicant when we are working on a project. We try to be cognizant and aware of them but they are not part of our ordinance code and we have no power to enforce them,” she states, matter-of-factly.

Why is this? Yaley explains it is because CC&Rs are created after the county approves a project and the developer goes to the state board of real estate for the white and pink papers to file and create legal subdivision lots. She maintains, “I would not say that the county is dismissive of CC&Rs but we do not – and it is not just Tuolumne County…it is a misconception that CC&Rs are enforced by the county.”

Typically, Yaley confides, “As long as [cell tower project plans] meet the requirements of the application they are generally approved either with some project modifications, usually to improve visual screening of the equipment.” She adds that growing public awareness about the projects are generating more public comments and questions, which she says are more than welcome. As for the Heavenly Hills project, should the board of supervisors choose to uphold the planning commission’s approval — with or without adding additional conditions – those who would choose to continue moving against it have the option of pursuing civil action.

“It is great to have the public involved in this process. We have several more that are being reviewed right now that between now and the end of the year and early in 2018 that will be going towards a public hearing,” Yaley states. She emphasizes, “We will just have to see what type of info we are able to analyze for these projects and what the recommendation is — I would never say that they would all be recommended for approval — each one would have to stand on its own merits.”

Yaley estimates that seven tower proposals were submitted this year of which one has been approved for a location east of Pine Mountain Lake in an agricultural area off Ferretti Road; the others remain works in process. Last March, as reported here, a proposal for a 100-foot tower designed to resemble a pine tree planned for Pine Mountain Lake Golf Course ultimately made it to the board of supervisors, which gave its approval.