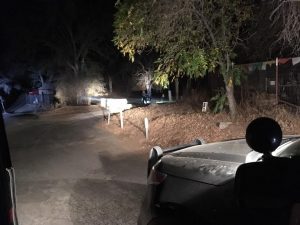 Sonora, CA — On Saturday night the Tuolumne County SWAT Team, and other officials, responded to Jackass Hill, near Highway 49, for a report of an armed suicidal suspect.

The Crisis Response Unit communicated with the man, who eventually put down his weapons, and was taken into custody for a mental evaluation. There was a huge law enforcement presence in that area between around 5:30-8:30pm. Others that assisted included Tuolumne County sheriff’s deputies, CHP, the Crisis Negotiation Team, Angels Camp PD, Calaveras County Sheriff’s Office, EMS and fire personnel.