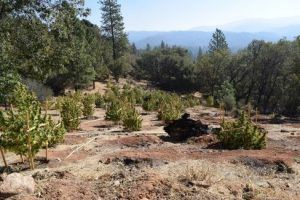 San Andreas, CA — A large illegal marijuana grow in West Point was the focus of a search warrant and seizure that turned up evidence that human waste was being applied onsite.

Calaveras sheriff’s officials report that around 9:30 a.m. Thursday deputies served the warrant on an unregistered marijuana grow site located on the 3000 block of Bald Mountain Road. While on the property, deputies discovered evidence that the neighboring property also had two connected outdoor marijuana grows, noting connecting waterlines and electrical extension cords so another search warrant was obtained that allowed deputies to further investigate the adjoining grows. Officials say that 445 marijuana plants and 60 pounds of processed marijuana were seized and destroyed.

During the search, deputies also discovered the occupant’s septic system was discharging waste and sewage above ground and a farming practice was being used that involved applying human feces to the soil around the plants and vegetables.

While at the location, deputies contacted 63-year-old e Rong Zhang and 42-year-old Sishou Zheng, both with Sacramento addresses. Both were subsequently arrested for illegal marijuana cultivation and felony charges of knowingly discharging hazardous substances upon the land of another without the permission of the owner. They are being held in the Calaveras County Jail on $30,000 bail.