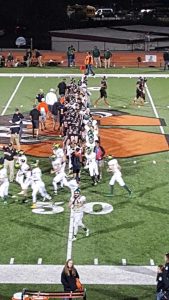 On a beautiful autumn night the Sonora High Wildcats continued their winning streak over their crosstown rival, the Summerville Bears, 37-27 at Thorstead Field in Tuolumne. This was a game for not only bragging rights, but a Mother Lode League match up that would place the winner in the driver’s seat in the quest for a championship this season. Thorstead Field was packed and friends, families, and coworkers were set to root against one another as play got under way.

The Bears defense forced the Wildcats to punt on their first offense possession to the Bears punt returner, Luke Fulkerson, who took it 70 yards up the sidelines for a touchdown and the Bears were up 7-0 before the Summerville offense even touched the field. Sonora’s offense just could not seem to get going early in the first quarter. After Summerville took the next possession down the field, the Cats defense dug in and stopped the dangerous Bears offense and a 29 yard field goal attempt came up short for Summerville who was looking to add to their lead. Sonora put together a nice drive late in the first quarter as Jacob Gookin kept the ball and rushed for a touchdown from 17 yards out. The Cats tacked on a two-point conversion and Sonora lead 8-7 at the end of the first quarter over the Bears.

The second quarter opened with the Wildcats putting together a nice sustained drive that ended with a Gooking pass that threaded the needle through three Bear’s defenders putting the ball where only his receiver, Karson Clifton, could haul it in for a 28 yard touchdown. Sonora added the extra point and lead early in the second quarter 15-7. That score did not last long as on the ensuing kickoff, Mr. All Purpose, Luke Fulkerson, took the ball 90 yards down the sidelines and added six points to put the Bears down only two. On the point after attempt, J.T. Kress broke through the line and blocked the extra point and the score was 13-15, Sonora leading. The Wildcats added another score in the second quarter when Rico Sanchez rushed from 17 yards out and Jack Camara added two-points on the conversion and the Wildcats would go into halftime with a 23-13 lead.

After halftime, Summerville again drew first blood with Dominic Esquivel taking it from 21 yards out and the point after converted. The Bears closed the gap to three, down 23-20. The two team’s defenses then slugged it back and forth with grit and determination on both sides of the ball. Shoestring, touchdown saving tackles and brutal hits at the line of scrimmage underscored how hard both teams were fighting for this game. Sonora’s Jack Camara was able to break a run off tackle and turn it back up the middle of the field, rushing 59 yards for the score. The point after was good and again the Wildcats were up ten, 30-20.

In the fourth quarter, the Bears put together a drive that was capped by a quarterback sneak by Mike Litzler on a quick snap and after the extra point was converted the score was Summerville 27, Sonora 30. Camara punched in another score from three yards out around the middle of the fourth quarter and the Cats were again up ten points, 37-27. Summerville never quit fighting all night and that didn’t change in the fourth quarter, but the Wildcats defense was able to not allow anymore scoring. As the clock wound down on a game that was better than anyone thought it might be, the Wildcats were able to snap the ball and kneel on it to run out the clock and claim victory, 37-27,  handing Summerville their first loss of both the season and league play. It will be an exciting year for Tuolumne County with both the Bears and Wildcats putting on an amazing show at Thorstead Field Friday night under the lights.

Next week Sonora is at Dunleavy Field for Homecoming Night against the Linden Lions. Game time is at 7pm. The Summerville Bears travel to Argonaut to take on Mustangs in Jackson.

Calaveras High was able to claim the title “Battle of the Bell” winner on its home turf against its long time rival Bret Harte with a final score of 45 to 7. Calaveras has a bye-week and the Bullfrogs face Amador next Friday at 7p.m. in Sutter Creek.