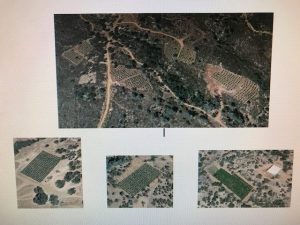 San Andreas, CA — According to sheriff’s officials, a medical commercial cannabis grow operation whose finalized permit had been pending was instead busted with several others.

Calaveras County enforcement officials report that they destroyed just under 3,000 marijuana plants and thousands of pounds of drying and processed pot in connection with a two-day operation beginning Wednesday that initially focused on a registered grow along Walker Trail between Copperopolis and Jenny Lind. The issue was that officials had discovered numerous additional cultivation plots well in excess of the allowable canopy size.

Upon their arrival members of the marijuana enforcement team (MET) and code compliance note that they saw several subjects fleeing on foot; some of them were truck drivers who jumped from their vehicles. According to the incident report, Fish and Wildlife (CDFW) game wardens responded to the property for evidence of poaching and environmental impacts on nearby creeks and five plots containing 680 marijuana were eradicated.

Deputies subsequently found connections and interlinking roadways between the unauthorized sites and three surrounding parcels with commercial marijuana cultivation registrations underway, including the original parcel that was subject to the planned abatement. So the sheriff’s office obtained a search warrant for these locations and by the end of the second day destroyed an additional 2,298 marijuana plants as well as thousands of pounds of marijuana in various stages of drying and processing.

Although none of those who fled the property have yet been captured, multiple campsites and personal property located on scene indicated evidence of individuals living there, tending to the grow and processing operations. Officials note they seized one firearm and a set of body armor and additionally report that follow up and interviews continue, as the case remains an active one.