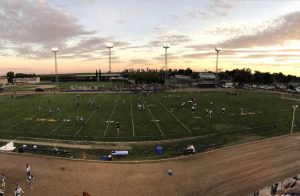 Coming off a bye-week, the Summerville Bears traveled to Linden to face the Lions Friday night in the first league matchup of the 2017 season. It was a quick start for the Bears, getting the ball right away and feeding Dominic Esquviel who rushed for an opening drive touchdown. The Bears would then endure the only turnover of the ball game on their second drive. When quarterback Michael Litzler was hit hard from behind and fumbled the ball that would then be recovered by the Lions.  After that minor mistake, the Bears played an almost perfect ball game. Only giving up six points to the Linden Lions through four quarters of action, the Bears put together a solid offensive, defensive and even special teams game.

Racking up 57 points in the game, marks the teams’ biggest win so far this season. Luke Fulkerson, caught, rushed and of course returned a punt all for touchdowns; adding another great game to his spectacular season. Sophomore Nick Veach, also got involved with an interception and two rushing touchdowns.

The final scoreboard read 57-6. Lead by Head Coach Sean Leveroos, the Bears are 5-0 and have the upmost of confidence heading into the biggest rivalry game of the year at home against Sonora.

The Sonora Wildcats continued their winning ways Friday night with a 49-21 victory over Amador High School. Amador opened the scoring on a 23 yard touchdown reception and then converted the point after to take an early 7-0 lead. Rico Sanchez started the scoring for Sonora on a nine yard touchdown rush. The end of the first quarter the ballgame was tied, 7-7.

To open the second quarter, Jack Camara scored from one yard out with Amador defenders clinging to him. The Wildcats scored again on a pitch and pass from Tyler Matyshock to Evan Bearden for a 47 yard score and the Wildcats lead 21-7. Amador came right back by adding a quick scoring pass from 49 yards out. The Buffaloes added another score from one yard out and again the ball game was tied 21-21. Before halftime, Evan Bearden caught his second touchdown pass, a beautifully thrown ball from Jacob Gookin that hit Bearden in stride for a 20 yard score and Sonora converted the extra point, taking a 28-21 lead into halftime.

In the second half, the Wildcat defense stepped up their game and tightened down on the Buffaloes. C.J. Castleman opened the second half scoring on a five yard touchdown rush. The extra point failed and the Wildcats were up 34-21. Connor Pullen, who has been sidelined with an injury, made his comeback in a big way rushing to the glory land on a 29 yard scamper. The Wildcats added a two point conversion and were leading 42-21, Sonora up. Evan Bearden had a gorgeous strip sack that he scooped up and returned for what initially was a 13 yards fumble recovery for a touchdown, but a Sonora penalty negated the score and the Wildcats went into the fourth quarter up 42-21.

In the fourth quarter, Michael McKernon added a score on a three yard rush and the Wildcats added the extra point to lead 49-21. That’s the way the game would end with the Wildcat defense forcing a turn over on downs on Amador’s last possession.

Sonora wins their fourth game straight to go 2-0 in the Motherlode League. Next week Sonora makes the short drive to Tuolumne to take on the undefeated Summerville Bears in what is certain to be one of the most exciting cross town rivalry games seen in years.

Calaveras beat Argonaut 27 -7. The Bret Harte Bullfrogs lost to Winters High 34-6. The Frogs make the short hop over to Calaveras High next week.