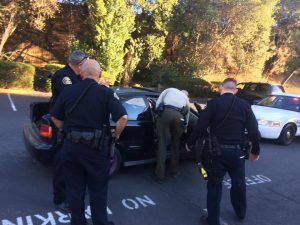 Columbia, CA — Tuolumne County Sheriff’s Detectives report two thieves robbed a man at gunpoint near the entrance of Columbia College yesterday evening and drove off in a vehicle.

The men, 25-year old Michael Valentine and 22-year-old Gabriel Uribecarrion, were caught a little while later in the 250 block of Greenley Road by Sonora Police officers as Valentine was wearing an ankle monitor.

Tuolumne County Sheriff’s Detectives took over from there and the wallet thieves were booked into the county jail for robbery and conspiracy charges. Additionally, Valentine is facing charges of felon in possession of a firearm and drug paraphernalia and carrying a concealed weapon in a vehicle. He also has three outstanding warrants for failing to appear in court on charges of carrying a concealed weapon with a prior, possession of a controlled substance for sale, and violation of probation, according to sheriff’s officials, who add that this investigation is ongoing.