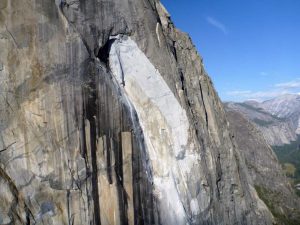 Rockslide at Yosemite that injured one 9-28-17

Update at 7 p.m.: Yosemite National Park has released the name of the man killed in yesterday’s rockfall and details a new rockslide today that injured one person and shutdown a roadway.

The victim of Wednesday’s rockfall has been identified as 32-year-old Andrew Foster of Wales. Park spokesperson Scott Gediman indicates that his wife, whose name has not been released,  is undergoing medical treatment in an area hospital.

Meanwhile, another rockfall that Gediman describes as in the same area of El Capitan, but significantly larger than yesterday’s has injured one person.  The victim was flown out of the park via air ambulance for treatment at an area hospital, according to Gediman. No condition has been given on that person. The rockslide occurred on the Southeast face of El Capitan at 3:21 p.m. Gediman notes that geologists are assessing the size and weight of the rockfall with the estimates to be forthcoming. (Further details regarding a road closure can be viewed below.)

Update at 5:50 p.m.: Yosemite Nation Park has released further details regarding travel after a new rockslide. Park officials indicate that Northside Drive exiting Yosemite Valley will be closed from Camp 4 to El Capitan Crossover for at least 24-hrs due to a rockfall blocking the roadway. Motorists are advised to use Sentinel Drive onto Southside Drive to exit Yosemite Valley, which has changed from two lanes in one direction to two-way traffic. It is unclear if there are any injuries related to this incident.  (Further details on Wednesday’s deadly rockfall are below.)

Update at post at 4:30 p.m.: Yosemite National Park is reporting a new rockslide off of El Capitan today. This is the eighth rockfall in two days. There is no word on whether there are any injuries related to this latest slide. On Wednesday, a rockfall killed a man and seriously injured a woman, both from Great Britain. (More details on that incident can be viewed below.) Park officials indicate that Northside Drive exiting Yosemite Valley is closed due to the rocks blocking the roadway. Motorists are advised to use Sentinel Drive onto Southside Drive to exit Yosemite Valley.

Search and Rescue team officials located one person dead, and another with serious injuries. The victims were a couple visiting from Great Britain. They were in the park to rock climb, but were not climbing at the time of the incident

The National Park Service is working with the Consulate to notify family members. Until notifications are made, the names are not being released.

Gediman reports that all other people in the area have been accounted for and search efforts have concluded.

The National Park Service notes that around 80 rockfalls occur per year in Yosemite, though most are in isolated areas and go unreported. Gediman notes that the rockfall from El Capitain was similar in size and extent compared with many others in the park.