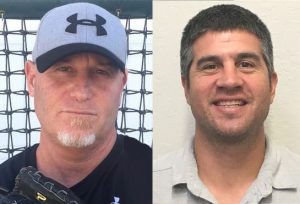 Sonora, CA — Both brimming with a passion for their sports two newly hired high school coaches also share a desire to build community while growing their sports programs.

As reported here, the recent tapping of Boys’ Varsity Basketball Coach Lloyd Longeway and Baseball Coach Chet Winham fill two of three crucial openings at the high school. According to Sonora Union High School District Pat Chabot, the district is re-advertising its need for a Boys’ Varsity Soccer coach — hoping to attract more candidates soon — as the season for both basketball and soccer begins Nov. 6. Come early February is the kick off for baseball and other spring sports.

In separate interviews with Clarke Broadcasting Longeway and Winham share their experience, background and plans ahead. Longeway, far from a newcomer, already has nine years of coaching Wildcats boys’ and girls’ basketball at all levels except for Boys’ Varsity and was last year’s Boys’ JV coach. He also coached Wildcats soccer for 15 years before the sport became a winter one, requiring him to choose between the two.

Over the years, Longeway has also lent a hand assisting the Columbia College basketball program and coached high-level local players from Calveras, Bret Harte and Sonora high schools on the Foothill Stars travel team for three years that culminated with winning the 2013 JV Elite Basketball championship at the California State Games in San Diego. A Class of 1998 Sonora high graduate he played Wildcats soccer and basketball. Excited for the basketball season to get underway Longeway shares, “We have a lot of returning players. The [previous Varsity] coach had a lot of success — and the Freshmen and JV did, too.I am just hoping to continue it – to grow and improve…it has such a tradition, so it is exciting to coach in a program with such a rich history in basketball.”

Asked what he would most like the community to know, Longeway enthuses, “We just want to have a team that the community is proud of and be a good representation of the community.” Too, he emphasizes, We would love to have their support and see the young elementary school players out at games and camps that we will be holding — and we just hope to see a lot of people out there with a lot of enthusiasm for Wildcat basketball.”

A Sonora resident, Longeway’s wife Nicole is a nurse at Adventist Health Sonora and their daughter a sophomore at Connections Academy. Their son Kahale Warring played basketball and water polo for the Wildcats and is attending San Diego State University on a football scholarship, playing tight-end for the now 17th-ranked Aztecs.

Former Baseball Semi-pro Steps Up To The Plate

For the Wildcats new Boys’ Varsity Baseball Coach Chet Winham, great timing came into play with the open coaching slot and his desire to give back to the game and the community. Winham grew up in Redondo Beach, attending South Torrance High School. Before graduating in 1985, he played football, baseball and soccer, lettering in two sports and tasting victory as part of two CIF championship teams. After migrating to the Bay Area and playing junior college football, he played a dozen years’ worth of semi-pro baseball with a tournament playing travel team out of San Ramon.

Describing his teammates as ex pros from teams like the Houston Astros and Cleveland Indians as well as ex college players from all over the country, Winham recalls, “I thought I knew quite a bit about baseball after playing with these gentlemen because they certainly played at a high level.” Wryly, he continues, “But I started coaching my son Seth in the travel ball arena, which is fairly competitive.” He credits getting help from another father with a son on the team who turned out to be Jay Heeb, a notable Alhambra High baseball coach with a winning record. “This is where I got my coaching tutelage. This guy taught me more about baseball than playing with all those other gentlemen,” he confides.

Widowed back in 2001, Winham recalls his three children were then ten, seven and two years old. Although he had offers to coach high school baseball, he says raising them took top priority. Daughter Brittany, now 26, is an Army wife with a young baby, who recently left to join her husband at his station in Kansas. Seth, now 24, has almost five years in the Air Force and is stationed in North Dakota. Daughter Brooke, 19, diagnosed as autistic, is currently in the Sonora’s Transitions program. After being a single Dad for 15 years, four years ago Winham met and befriended Jennifer Teem, who was also widowed with children. Happily he notes, “Things blossomed from there — and we are together and take care of one another.” He smiles, proudly adding that his “other two kids,” Amanda Teem, 15, a Sonora High sophomore, plays JV Volleyball, and Jack, now a 7th grader at Sonora Elementary, plays football and baseball.

Winham says through coaching his son in travel ball, “I realized how much I enjoyed helping young players understand how to play the game correctly and would really like to take this opportunity to help the student-athletes.” Noting all the pitfalls out there for aspiring ball players, he states, “Young men need to understand…it is more important to be a student than it is to be a good ball player.” Hitting the point home, he adds, “If you can get it done in the classroom and are a decent ball player, doors will open  — and I would really like to shine a light on that for these students.”