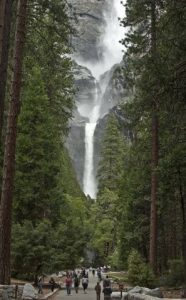 According to Yosemite spokesperson Ranger Jamie Richards, “We were impacted particularly by the Railroad Fire at the south end of the park due to Highway 41 being closed.” Although she maintains the air quality conditions and related wildfire concerns did not change visitors’ numbers very much but resulted in more delays at both the Big Oak Flat and Arch Rock entrances due to the Highway 41 closure.

She adds that there was one incident that officials classified as moderate to severe involving a vehicle carrying a family that was driving along Big Oak Flat Road between Crane Flat and the large tunnel. “The family had stopped in the road – the wind was blowing that afternoon and it happened around 5 in the afternoon Sunday evening — and a tree branch came down and hit [the vehicle].”

Richards says of the four people who were in the car two passengers were injured, requiring them to be airlifted from the park and taken for medical care. Asked if the injured were locals or traveling from afar, she shares, “They were visiting from abroad…from Mexico. We are not releasing any more information on the family at this time out of respect for the family.”

Other than that unfortunate accident, Richards describes the holiday weekend — and in fact, the season to date as “fabulous.” Outreach about higher water levels early in the season and conditions that led to some water rescues has given way to significantly decreased water levels and a dissipation of water issues. “I don’t know of any in the past month,” she notes.

“The weather is still great in Yosemite and we anticipate for the next month or two to continue to see busy visitation on Saturdays and Sundays. The oaks, maples and other leafy trees are still green and fall is almost in the air with the barest golden hint to some leaves,” Richards enthuses. She reports that nuances of fall colors barely tinging the trees now will become more noticeable in another couple of weeks.

Due to the tourist season still being active, albeit with more retirees and other visitors either unaffected by back-to-school schedules or with more flex time, Richards shares some parting words for the wise; encouraging arrival planning before 9 a.m. to guarantee a parking space. Those entering the park later than that she says should anticipate one to two-hour delays while finding a space.