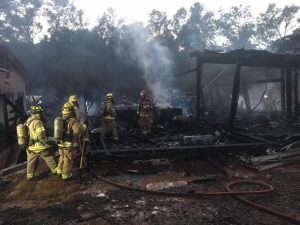 Update at 5:30am: Crews remained on scene overnight fully extinguishing the “Golf Fire” in the 10500 block of Golf Links Road near Jamestown Road. CAL Fire reports that a residential home was destroyed, there was minor damage to two adjoining structures, and a small spot fire into grass. What ignited the fire is still under investigation.

Update at 7:25pm: Fire crews were successful in knocking down the flames of the two structure fires that ignited near the intersection of Golf Links Road and Jamestown Road. As reported earlier, the Tuolumne County Sheriff’s Office notes that one unoccupied home had major damage and a second structure sustained minor damage. Many of the initial air and ground resources have been released and are returning to base. Mop-up operations will continue into the evening. The cause is still under investigation.

Update at 7:08pm: The Tuolumne County Sheriff’s Office reports that fire crews are making quick work of containing the flames. One unoccupied home sustained extensive damage and a second  structure has minor damage.

Original story posted at 6:50pm: Jamestown, CA — There is a residential structure fire in the Jamestown area that air and ground resources are working to extinguish.

It was reported to CAL Fire as being near the intersection of Golf Links Road and Jamestown Road. One residential structure is fully involved and there are others nearby. It is one of the new Boulders contemporary homes under construction. We’ll pass along more information when it becomes available.