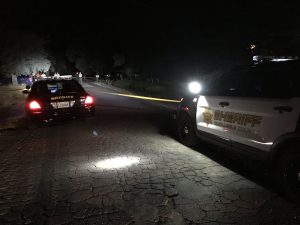 Soulsbyville, CA — The Tuolumne County Sheriff’s Office is investigating a reported shooting incident that occurred shortly before midnight in the 20000 block of Caylor Drive in the Willow Springs area of Soulsbyville.

Several neighbors in the area called 911 after hearing the sound of gunshots. Deputies went to a home in the area and multiple witnesses confirmed that a shooting did take place. The suspect allegedly went to the home and asked for a male by name, and then punched the unidentified victim in the face. The suspect then took out a handgun and fired several rounds. The investigation is still ongoing, but the Sheriff’s Office reports that a second male victim at the home had what appeared to be a gunshot wound. The victim initially declined medical attention, but was later transported to the hospital for treatment. Several 9mm casings were found nearby in the roadway.

Sheriff’s Office spokesperson, Sgt. Andrea Benson, reports the shooting “is not believed to be a random act of violence.” She asks that anyone with information about the incident to call 209-533-5815.

The suspect is described as being a white male adult, 5’8″ to 5’9″, with tattoos on his arms, and driving a black sedan.