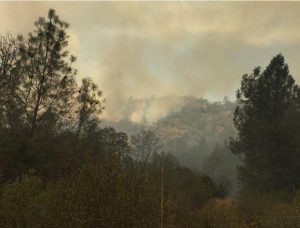 Update at 9:35 p.m.: Cal Fire has released the numbers regarding resources on the scene of the Spring Fire in Mariposa County burning between the Mormon Bar and Bootjack areas. There are 33 engines, 14 fire crews, 6 air tankers, 3 helicopters, 5 dozers and 4 water tenders. The cause of the fire is under investigation.

Columbia’s two tankers have been released from the scene but Air-Attack along with a helicopter will return tomorrow at 9 a.m. to further aid in battling the blaze, according to Cal Fire Tuolumne-Calaveras Unit Dispatch. (Further details on evacuations and road closures can be viewed below.)

Update at 9:10 p.m.: Cal Fire reports that firefighters have stopped the flame’s forward spread on the Spring Fire burning in Mariposa County that has forced residents from their homes and multiple road closures between the Mormon Bar and Bootjack areas. The acreage is holding at 225 and crews have achieved 10 percent containment. Cal Fire indicates that crews will continue to build up hose lines overnight to gain further containment.

An evacuation advisory for Indian Peak has just been posted. Mariposa County Sheriff’s Department has released this update regarding mandatory evacuations and road closures:

The Red Cross has set up a shelter at Woodland Elementary School located at 3394 Woodland Drive in Mariposa.

Update at 6:30 p.m.: The Spring Fire burning along Highway 4 and Allred Road in the Mormon Bar area has grown from 60 to 225 acres. Cal Fire reports the flames are being fueled by grass, brush and oak woodland. Evacuations remain in place within the Allred and Ashworth roads area. Columbia aircraft continue to help battle the blaze.

*Mariposa County Sheriff’s mandatory evacuations, fire advisement areas and location of a Red Cross Shelter can be viewed below.

Update at 4:30 p.m.: Cal Fire reports the Spring Fire’s acreage has grown from 25 to 60 acres. It is burning in the Mormon Bar area of Mariposa County. The flames broke out along Highway 49 near Allred Road around 2 p.m. Columbia aircraft are assisting in battling the blaze.

An evacuation center has been set up at Woodland Elementary School at 3394 Woodland Drive in Mariposa.

Update at 3:45 p.m.: Mariposa County Cal Fire Unit officials have named the blaze the Spring Fire. It is 25 acres in size and burning along Highway 49 and Allred Road in the Moromon Bar area. Highway 49 is closed from Silva to Varain roads.

An evacuation center has been set up at Woodland Elementary School at 3394 Woodland Drive in Mariposa.

Sheriff’s officials also offer this notice of areas under fire advisement (these are NOT evacuations, just advisements of fire in these areas)
Indian Peak Road to Humbug Road
Grist Road to Silver Lane
Silva Road from HWY 49S to Schafer Road

Original post at 2:20 p.m.: Mariposa County, CA — If you heard or saw the Columbia aircraft fly overhead they are going to assist in a vegetation fire south of Mariposa.

Cal Fire reports that the flames broke out along Highway 49 near Varain Road in the Morman Bar area of Mariposa County.  There is no word on the fire’s size or the flame’s rate of spread or whether any structures are threatened. Additionally, a helicopter from Yosemite National Park has also been called to the scene, according to Cal Fire.