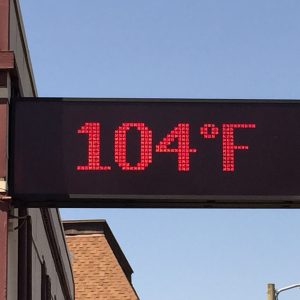 Sonora, CA — With a Heat Advisory in effect from over the weekend through most of the workweek — and multiple days with triple-digit temperatures in the forecast — the Mother Lode is vying for some new weather records.

According to Sacramento-based National Weather Service meteorologist Mike Kochasic, who spoke with Clarke Broadcasting as Sonora temperatures were hitting 100 degrees late this morning, when the mercury hits 103, which is today’s forecast, it will break the previous record of 102 set back in 1988.

Looking ahead, Kochasic shares, “For the rest of this week — Tuesday, Wednesday and Thursday — we are also looking at 103 [forecast the daily highs]. If a 103 happens on Tuesday, that would tie a record of 103 set in 1961, so it has been awhile since Sonora has seen that kind of heat.”

However he adds, 103 degrees is just below records for Wednesday and Thursday, which, both set back in 1961, are respectively 107 and 113. “It looks like 1961 was a pretty warm year apparently — and that [temperature of] 113 on Thursday was the max for June for Sonora – all time,” he states. In a somewhat comforting tone, he adds. while temperatures will continue to be waay warm it should not get quite as hot as that.

Noting numerous locations are setting weather records because of the heat, Kochasic recounts, “The last time we saw this kind of [heat] stretch was back in 2006 –- that was the record –- with 11 straight days of over 100 degrees. With the current forecast it will be about nine straight days. So it will fall just shy of that record — but [is] still one for recent memory.”

As a final thought to add to this literally, hot topic, the weatherman notes, “We definitely want people to remember to stay of the sun as much as they can — avoid the temperatures when they soar between 2 and 5 p.m., that is when the warmest time of the day is — so try to stay out of that sun as much as possible.”