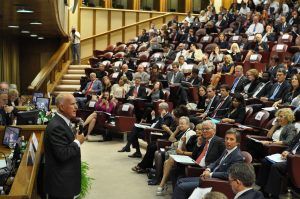 Sacramento, CA – During his announcement of the withdrawal on Thursday, President Trump stated,  “Our government rushed to join international agreements where the United States pays the costs and bears the burdens while other countries get the benefit and pay nothing.” (Click here for more details on the President’s decision.)

After the announcement Governor Jerry Brown criticized the President for being “totally wrong” on science and released this statement, “Donald Trump has absolutely chosen the wrong course. He’s wrong on the facts. America’s economy is boosted by following the Paris Agreement. He’s wrong on the science. Totally wrong. California will resist this misguided and insane course of action. Trump is AWOL but California is on the field, ready for battle.”

Brown also announced Thursday that California, the sixth-largest economy in the world, has teamed up with the Governors of New York and Washington to form the U.S. Climate Alliance. The coalition’s goal will be to convene U.S. states committed to upholding the agreement and taking aggressive action on climate change. Washington State Governor Jay Inslee stated, “I am proud to stand with other governors as we make sure that the inaction in D.C. is met by an equal force of action from the states.” Calling the president’s actions shameful, he adds that it leaves the full responsibility of climate action on states and cities throughout our nation. New York Governor Andrew Cuomo echoed that remark stating, “This administration is abdicating its leadership and taking a backseat to other countries in the global fight against climate change.”

Additionally, eighteen U.S. jurisdictions have joined the Under2 Coalition, representing 89 million people and 28 percent of the U.S. population. As earlier reported here, Governor Brown will head to China on Friday to build foreign support for carbon reducing policies. The trip includes meetings in Sichuan and Jiangsu, the first Chinese provinces to join the Under2 Coalition.