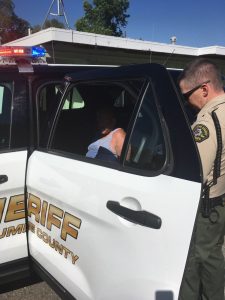 Christopher Phillips being arrest at scene

Sonora, CA – A motorists described what he called a scary sight on Highway 49 as he saw a man walking along the roadway with a bat that looked “out of his mind.”

The Tuolumne County Sheriff’s Office was alerted to the man with a bat on the highway at Springfield Road intersection in the Sonora area by that passing driver. A deputy was able to track down 41-year-old Christopher Phillips at the Sonora Estates Mobile Home Park where he heard yelling coming from a trailer. He ordered the individuals to come out, Phillips and four others emerged.

Further investigation determined that the argument had to do with Phillips’ ex-girlfriend, who was one of the people in the trailer. A man also involved in the scuffle was able to get the bat away from Phillips, who was arrested for assault with a deadly weapon and burglary. Deputies explain the latter charge is for entering the mobile home with the intent to commit the felony assault.