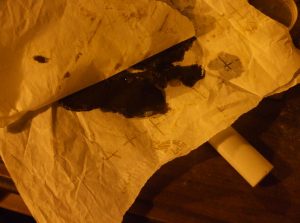 Valley Springs, CA – Calaveras County Sheriff’s officials were alerted to a fight that erupted in gunshots just before 2 a.m. Tuesday at a home on the 2100 block of Evans Road in Valley Springs. Once on the scene deputies spoke to several subjects and then searched of the property. On the grounds they found an illegal, unregistered, marijuana grow that netted 1 lb. 3.8 oz. of hash oil, also called butane honey oil, and 39 pot plants. Sgt. Anthony Eberhardt notes, “It should be noted that the process of manufacturing concentrated cannabis can involve volatile chemicals which are extremely dangerous. Additionally, deputies located and seized several illegal aerial fireworks. “