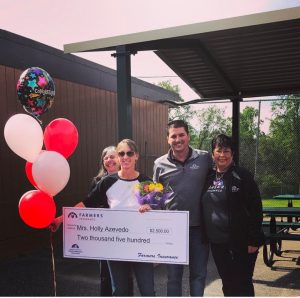 Sonora, CA — A Curtis Creek Elementary School teacher is being thanked for her commitment to the job — with some cash for the classroom.

Third grade teacher Holly Azevedo was picked in the first round of the Farmers Insurance “Thank America’s Teachers” contest that runs throughout the year. Azevedo cheerfully reacts, “It was an amazing feeling. We’ve been through a lot here at school lately. We’ve had the fire and landslide and it was a positive boost.”

As earlier reported here, a fire broke out in a classroom on January 26 damaging nine classrooms in the A-wing of the school, another four had already been shut down due to winter storms causing a mudslide, bringing the total closed classrooms to 13. Additionally, supplies for those classrooms were also lost. That prompted Azevedo to enter the contest, which her proposal can be read below. The contest consists of three periods where 60 teachers are selected in each segment.  A total of 180 winners are chosen from all across the country. The prize for each teacher is $2,500 in spending money for the classroom.

Azevedo says she already has the money and now it is just a question of what to buy, “I’ll probably order some STEM (Science, technology, engineering, and mathematics) materials and some materials to enhance our art program. We have an arts program called “Meet the Masters.”  I’d like to get some materials for our Picasso unit that we teach every year in the third grade.” She also wants to reward the kids, adding, “We also have a big event at the end of the third grade year. We have a carnival to reward the kids for all their hard work. So, I’d also like to get some materials to reward kids for that also.”

The school held an student assembly where local Farmers Insurance Agent Leon Curtis, presented Azevedo with a check as seen in the image box. By winning this leg of the contest she is now qualified to enter the $100,000 contest, which is awarded to one teacher each year. Excited at the thought, Azevedo says that would be amazing and would add to the schools already stellar record, boasting, “The school has raised over $250,000 in grants from teacher websites as a whole.  So, we really have been very successful with it — it’s been great!”

Here is Azevedo’s proposal that won her the $2,500 grant:

Our school suffered through a fire last week.  My classroom was affected by the fire.  All my materials and supplies have smoke damage and are rendered unusable.  We returned to school on February 8 with just the basic supplies, pencils, crayons, and paper.  With this proposal I would purchase a book shelf and books as all of our books are inaccessible.  I will also purchase basic art supplies like paints, brushes, glue and construction paper.  We are starting from scratch in the middle of the year and the funding from this project will help us rebuild and heal.