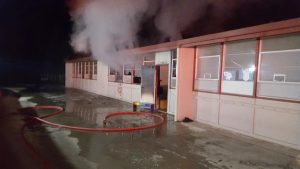 Update at 12:30pm: This morning’s fire at Curtis Creek Elementary School was electrical, and there is no indication of foul play, according to CAL Fire.

It ignited shortly before 5am. No further details regarding the cause have been released at this time.

Curtis Creek School Board President Nick Stuart tells Clarke Broadcasting, “Thanks to a diligent staff member that reported the incident, CAL Fire was able to respond to the scene quickly. The fire damage was contained to several classrooms.”

CAL Fire spokesperson Lindy Shoff reports that one classroom had “major” damage, another had “significant” damage and two others had smoke and water damage.

Board President Stuart adds, “We understand that parents and the community are looking for ways to help. We will be organizing several volunteer activities and looking for donations.”

The district office will be coordinating volunteer opportunities and donations. You can call 209-533-1083, ext. 6. Notably, many teacher supplies were damaged in the fire.

The exact extent of the damage is still being assessed. Stuart says it remains unclear how many classrooms will need to relocate. He reports that there are extra classrooms on campus that can be utilized over the coming weeks.

Curtis Creek Superintendent Sharon Johnson adds that it remains uncertain if students will be able to return to class on Monday, and things will be further assessed over the coming days. She encourages students and parents to avoid the campus while the cleanup efforts are underway.

Curtis Creek Elementary has around 450 students.

Update at 7:50am: The Tuolumne County Sheriff’s Office reports that the fire at Curtis Creek Elementary School directly damaged two classrooms. In addition, smoke and water damage occurred to at least four classrooms.

Original story posted at 5:53am: Sonora, CA — Officials are on the scene of an early morning fire that ignited at Curtis Creek Elementary School on Standard Road.

Firefighters were dispatched just after 4:45am to a fire that was fully engulfed in a classroom. The fire has been knocked down, and there was some minor extension into other classrooms as well, according to CAL Fire. There are resources on scene this morning from Tuolumne County Fire, CAL Fire, Rancheria Fire, Twain Harte Fire and City of Sonora Fire. No injuries were reported and what ignited the fire remains under investigation.

Curtis Creek Elementary officials report that school is canceled for today and tomorrow. We’ll pass along more information when it comes into the news center.