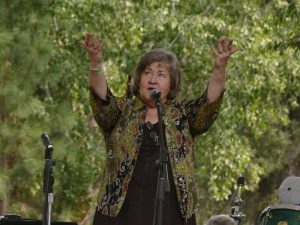 Smith was KVML’s Thursday “Newsmaker of the Day”.

The storyteller, teacher, performer, etc., launched her professional life in 1973. Over the decades, Smith has brought folks together to build and create. One of her favorite “hobbies” is connecting people with common interests to share skills.

A few years back, BZ and friends thought up the name “Hive-Arts” ~ A sustainable collective of folks who want to make sweet magic, just like those bees.

BZ, THE TEACHER, has helped others learn how to organize projects and outline support teams. BZ, THE PERFORMER, still enjoys being out in the world sharing her art form. And BZ, THE POET AND STORYTELLER, will just keep sharing tales and passing them to new generations until the lights go out.

So, what is this about semi-retirement for Smith?

“My health over the past few years has been compromised,” said the always busy BZ. “My love remains with the arts. My immediate focus will change. Rather than be directly in charge of several ‘artistic’ events (Poetry Out Loud, Drum Circles, arranging musicians for 2nd Saturday Art Night, etc.), I would like to focus on mentoring.”

Smith continued, “We have so much talent in this area and we need to sustain the arts. Part of the problem that we may face in the Mother Lode is the lack of young people becoming active in the local arts community. I would like to continue to encourage the younger residents to be directly involved and lead the next generation in both Tuolumne and Calaveras counties.”

Recently, Smith and Peg Reza had the chance to open the new “Made in the Sierra Foothills” performance and lecture series at Columbia College. Conceived and coordinated by English Department professor Callie Kitchen, they entertained and chatted with a gathering of 50+ people for almost two hours. They presented a 45 minute performance of works from “Striking Up Gold Mountain: Stories and Songs of the California Gold Rush,” and then enjoyed a Q&A with questions.

Smith uses events like this as a type of launching pad for a new exciting chapter in the local arts community.

“It is ‘semi-retirement’. I will continue to be an active champion, advocate and mentor for the arts and young artists,” said Smith.