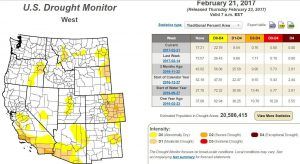 Sonora, CA — In many parts of the state, and certainly here in the Mother Lode, the latest incoming weather data confirms that this winter is setting up to become a record-breaker.

This week, weather and water officials, with an eye on drought conditions, continue to emphasize that wells on fractured rock systems will require more recharge time to recover — as they note current flood impacts from recent storms — as well as the potential for more incoming heavy precipitation to further swell our sizable snowpack.

On Tuesday the daily Sierra Nevada snowpack measured 186 percent of average for this time of year and 151 percent of what it generally comes in at on April 1st, usually considered the peak date for measuring purposes. Both the North Sierra 8-Station and Central Sierra San Joaquin 5-Station indices hit a record-breaking 230 percent of average for this week’s Feb. 21 measurement date, exceeding previously recorded benchmark numbers set back during the 1982-1983 water-year, considered to be the wettest in recorded history.

The latest precipitation across California was enough to, literally, wash any indication of the Extreme Drought condition category off the drought monitor map. (To view the latest version, click into the left image box). The last time this happened was nearly three and a half years ago on Aug. 6, 2013.

While on the map both Tuolumne and Calaveras counties are now depicted as being out of the drought, nearby portions of the San Joaquin Valley still show up as Abnormally Dry, current flooding conditions nonwithstanding. A range of Abnormally Dry to Moderate or Severe Drought conditions remain along the Central Coast and in southern California.

At the Department of Water Resources (DWR) in Sacramento, spokesperson Doug Carlson shares, “It has been pretty clear to us here at DWR headquarters…for the last month of more…just how remarkable this winter has been as far as precipitation and snowfall. It is far outstripping the pace of our wettest year on record, 1982-83 — and people who have been around here for awhile know what kind of a year that was.”

According to the Western Region Climate Center the 1982-83 water-year — classified as an El Niño one — led the state’s Top Weather Events of the 1900s. Marked by multiple strong storms that brought high winds, heavy rains and snowfall, flooding that year also hit coastal and valley locations hard; too, record snowfall in the Sierra Mountains caused a spring snowmelt deluge and other weather impacts that rendered disaster declarations in 46 counties. This year’s January storms and Lake Oroville spillway failure have already triggered local and state disaster declarations that last week generated a FEMA disaster proclamation response from President Donald Trump.

Demurring any opportunity to debate whether or not when the drought might now officially be declared over Carlson explains, “Our state climatologist has been telling us for a few years, that instead of looking at averages so much as we used to in the 20th century, we need to be mindful of the extremes that California weather experiences. I mean, we just finished five years of really, really dry weather, and now that is followed immediately by this very, very wet winter — and we could go back to dryness again at the end of this rainy season.”

While weather patterns remain in flux and climate change is a fact, Carlson maintains the experts are still trying to study — and get a handle on — what these are going to mean for the state’s weather, going forward. He wryly adds, “But there is no uncertainty in the fact that we have had a remarkably wet winter that may, in the end be a record setter.” However, Carlson readily admits that accurate forecasting is not much good more than ten or 15 days into the future. “Even your best meteorologists will say that it is a crapshoot after that,” he chuckles. “But we do know that we are only three weeks into February and we have all of March to go before we get to the point of the winter season when we normally get the highest snowpack…so we still have five weeks to go, at least, of potentially very wet weather.”

The Mother Lode region, Carlson says, is now trending about a month — or about 17 inches — ahead of the 1982-83 water-year, during which over 77 inches of rainfall was recorded. Given an average rainfall of about 40 inches from Oct. 1 until Sept. 30 in any given water-year, we are already averaging 60 inches — roughly 50 percent more than normal.

A few local rainfall figures to date are already record breakers: at Yosemite National Park Headquarters nearly 42 inches has so far been recorded for this water-year, which is 228 percent of average for now — and 166 percent for the water year. Too, in Calaveras County, Camp Pardee reports 27 inches of precipitation to date this water-year, which comes in at 230 percent of average for this time of year — and 116 percent for the water-year.

For the record, Lake Don Pedro today is being measured at 99 percent of its capacity and 141 of its historic average for this time of year — even while spillway operations are underway.

Over at Lake Oroville, where spilling and other management efforts are being directed to bring down and maintain lower levels while emergency repairs continue, the reservoir is reportedly measuring 79 percent of its total storage and 115 percent of its average for this time of year.

New Melones reservoir, as full as it has been in quite awhile, currently quietly sits at 63 percent of its capacity and 103 percent of what is now considered as its seasonal average. (To see current photos of New Melones, click into the slideshow in the upper left image box.)