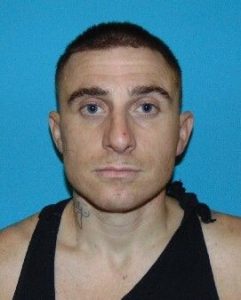 Columbia, CA — A man was arrested following a high speed chase in Tuolumne County over the weekend.

A Sheriff’s Deputy attempted to pull over a vehicle driven by 34-year-old Wesley Murray in the area of Quail Mine Road in Columbia. The black Chevy Cobalt was traveling at a high rate of speed and there were no stickers on the license plate. Murray refused to yield, but he lost control of the car, and it quickly came to a stop on the roadway shoulder. Murray and another unidentified male jumped from the car and took off running. The K9 Hans was deployed and captured Murray. He was later taken to Sonora Regional Medical Center for treatment for a dog bite injury he sustained. The Sheriff’s Office learned the vehicle had been stolen out of Tuolumne earlier in the day. Murray was later booked into county jail for outstanding warrants and charges of felony evasion, possession of a stolen vehicle and resisting arrest.