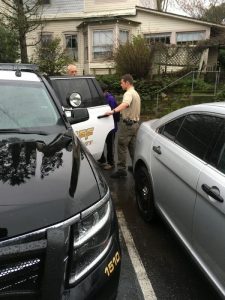 Sonora, CA — Two suspects involved in a fight have been arrested for criminal threats, shooting at an inhabited dwelling, and conspiracy to commit a crime.

On Sunday January 8th, a fight broke out an apartment on Chukar Circle in Sonora. The fight allegedly involved racial slurs and several people left the apartment in a white SUV. Two of the people involved were identified as 20 year old Zachary Zimmerman and 19 year old Ethan Pomeroy both of Sonora. Witnesses reported that Zimmerman yelled that he would be, “Back with a blast.”

Later the same evening around 7:30 PM, Tuolumne County Sheriff’s Dispatch received a 911 call from the occupants at the apartment reporting that someone had shot out the front window of their apartment. Deputies responded and determined the window was shot out by a shotgun.

Deputy Brandon Green noted that Zimmerman is on probation with a GPS ankle monitor. The Deputy reviewed the history of the ankle monitor and confirmed Zimmerman was at the location of the fight in the afternoon. It was also determined that Zimmerman left Chukar Circle and went to a residence in the 19000 block of Callahan Road in Sonora that belongs to the father of Ethan Pomeroy. Zimmerman then returned to Chukar Circle, at the time of the shooting.

Probation Officers located Zimmerman at a residence on Kincaid Flat Road and he agreed to come to the Sheriff’s Office for an interview. During the interview with Detectives, Zimmerman admitted to his involvement in the incident. He was arrested and booked into the Tuolumne County Jail for criminal threats, shooting at an inhabited dwelling, and conspiracy to commit a crime. Previously Zimmerman was arrested driving an Audi that was stolen from the Sonora area as reported here.

This afternoon, Tuolumne County Sheriff’s Detectives received information that Pomeroy was at his father’s home on Callahan Road in Sonora. Detectives located Pomeroy and transported him to the Sheriff’s Office for an interview. Pomeroy admitted that he and Zimmerman were in a fight on Sunday January 8th at the apartments on Chukar Circle. He also said he and Zimmerman went back to the apartment later that evening for retaliation and shot the apartment with a shotgun. Pomeroy was arrested and booked into the Tuolumne County Jail for the charges of criminal threats, shooting at an inhabited dwelling, and conspiracy to commit a crime.