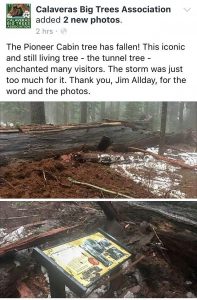 As reported here, earlier this week the park received worldwide media attention as the Pioneer Cabin Tree, one of California’s oldest tourist attractions fell Sunday.  What brought down the historic giant sequoia was a combination of trunk and root decay and storm water runoff, shattering it and a nearby cedar tree, according to park officials. Currently, California State Parks officials are evaluating what to do with the fallen tree.

Additionally, a portion of the North Grove Trail that was shut down due to the recent stormy weather reopened Friday morning. More than two feet of snow fell in the latest storm. The combination of snow and rain damaged the trail and some areas remain extremely flooded and muddy. Park officials advise that visitors will have limited access to the fallen Pioneer Cabin Tree as well as the Big Stump, while the remainder of the trail is closed. That is due to safety concern on several stretches of the trail where limbs have fallen and debris continues to run through small streams, according to park officials.

Park officials report trail crews are out daily repairing and clearing it for use. The park plans to reopen the entire trail “as soon as it is safe.”