A Sonora Home Is Riddled With Bullets 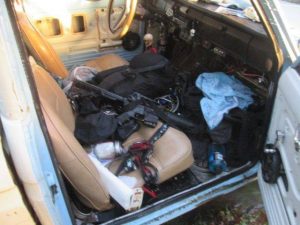 Davis' pickup with gun inside

It all began on Tuesday morning around 6:30 a.m. when deputies were called to a home on Quail Mine Road. The residents reported a woman was pounding on their door and yelling she had been beaten and threatened with a gun. On the way to the scene, deputies noticed an abandoned pickup in a ditch in the area of Big Hill and Sawmill Flat roads. A records check showed it belonging to 44-year-old Donald Davis.

Deputies continued to the home where they found 32-year-old Brandy Behr with injuries to her face. She told deputies that the owner of a mobile home on Four Wheel Drive in Sonora had attacked her. Behr was taken to Sonora Regional Medical Center for treatment.

Meanwhile, Davis was found on the porch of a home on Sawmill Flat Road and an AR-15 rifle was found inside his pickup. Originally, he told investigators that he took Behr to the home on Four Wheel Drive and she had brought guns along but he left when he heard fighting. However, witnesses at the home told deputies a different version of events stating that Behr, wearing a wig and carrying a pistol, barged into the home. She went into a bedroom armed with a pistol began firing at a woman’s face, but the gun jammed. That is when other residents jumped in and wrestled the gun from Behr and she ran out of the house. Then residents say the house was sprayed with gunfire.

Upon further questioning, Davis admitted the he and Behr had planned the whole home invasion together, which had him waiting outside the house and shooting a rifle into the home if “things went bad.”

Behr admitted her role in the incident and also that she had burglarized a home on Berry Lane in Sonora taking the AR-15 and pistol. She also claimed that she was beaten by the individuals who had taken the pistol from her.

The pair faces numerous felony charges including conspiracy, attempted homicide, and home invasion, firing a weapon into an occupied dwelling, felon in possession of a firearm, burglary and committing a felony while in possession of an assault rifle. Their bail has been set at half a million each.