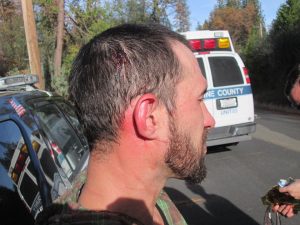 Groveland, CA — A man was allegedly stabbed by his girlfriend while inside a home he had broken into in Groveland.

It happened at a residence on Elder Lane this past weekend. An unidentified female contacted the Sheriff’s Office and stated that she was attacked by her boyfriend, 29-year-old Brice Johnson, with a guitar and a bat. She then stabbed him in self-defense and was worried he may need medical attention.

A deputy responded to the home and quickly noticed that several windows, and a glass patio table, were broken. The deputy knocked on the door several times and announced his presence. Johnson, who already had an outstanding warrant for his arrest, came out and spoke with the deputy.

The deputy relayed that an ambulance was responding to the home, but Johnson said it was not needed, despite having blood running down the right side of his head, behind his ear.

The Sheriff’s Office also reports that Johnson told the deputy that the home on Elder Lane was given to him in a deed. The deputy was suspicious because furniture was out of place, paperwork was scattered and the home alarm box had several wires cut and otherwise damaged.

The Sheriff’s Office discovered through a records check that the home did not belong to Johnson. Dispatch contacted the rightful home owners who stated they reported a burglary just a week prior regarding an onsite shed and that no one should be at the home.

Johnson later admitted to earlier burglarizing the shed and later breaking into the home and disarming the alarm. He was booked into county jail on a variety of charges.