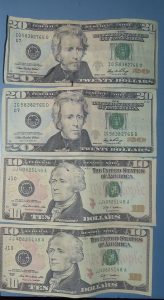 On Thursday just before 9:30 p.m. officers were called to the Applebee’s restaurant after an employee reported that a man tried to pass a fake $100 bill. Lt. Turu Vanderwiel detailed that the employee was suspicious of the bill and used a detector pen, which proved the cash to be counterfeit. The employee pointed to a 2015 Dodge Journey SUV as the vehicle the suspect got into, which was pulling out the parking lot. Officers stopped the SUV outside of Big 5 Sporting Goods.

During a search of the vehicle and its occupants deputies discovered another 15 counterfeit bills in various denominations, pepper spray, more than a half of a gram of heroin, nearly 3 grams of methamphetamine, a pipe and hypodermic needles.

All inside the SUV were from Stockton. Andrew Tolley, 37, was identified by the employee as the man who attempted to use the counterfeit bill. The other occupants, Marlon Robinson, 34, and Tyronza Gresham, 37, had warrants for their arrest out of another county. Robinson also gave the deputies a false name and ironically was on probation in San Joaquin County for the same offense.  Lt. Vanderwiel also notes that guards found narcotics concealed on Robinson as he was being booked into the Tuolumne County Jail.

Investigators linked the fake money Gresham Robinson and Tolley. The Sonora Police Department provided this list of charges for each suspect:

Tolley and Gresham’s bail is set at $10,000 each while Robinson’s is $25,000. The driver of the SUV Tamika Hicks, 34, was cited for unlicensed driving, which is a misdemeanor, and was released.