The Local Connection Of Hermie The Bug 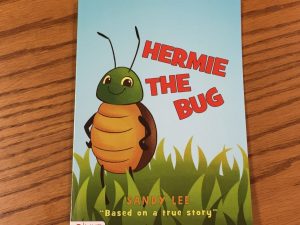 Sandy Lee has never authored a children’s book before. However, with her son’s mysterious death six years ago, she hopes that she has a book with a character, that children will fall in love with.

Lee was Wednesday’s KVML “Newsmaker of the Day”.

‘Hermie The Bug’ by Sandy Lee, has been released just in time for the Holidays. A portion of every copy of Hermie the Bug, goes toward a Missing Children’s Organization. The book is based on a true story and is inspired by her son Darvis Lee jr.

In October of 2010, thirty-six year old Darvis Lee Jr., was last seen in the Quail Mine area off Big Hill Road.

Three months later, a community search crew made up of friends and family, found a piece of jawbone that was confirmed to belong to Darvis. An autopsy was conducted by an outside expert.

How Darvis Lee Jr., died though is unknown and the Tuolumne County Sheriff’s Department wasn’t sure if foul play was involved.

Lee and her husband had offered large rewards regarding information about their son’s death.

Lee wrote her first book, “No Unturned Stone” – A Mother’s Quest to try to share their story in hopes that the truth of what happened to her son in October of 2010, when he mysteriously disappeared, will one day be revealed.

Now in Lee’s children’s book, both her son and daughter are mentioned. Hermie is inspired by the things that Darvis used to say.

In the story, children are taught to respect even the smallest creatures among us.

This Saturday November 5th, Lee will hold a book signing at Schnoogs Cafe and Espresso, 1005 Mono Way in Sonora, from 2 PM – 5 PM. Lee will also be at Revive Cafe and Coffee Roastery in Tuolumne on Tuesday November 8th from 8 AM – 11 AM.

The book is also be available at Mountain Book Shop and online at www.hermiethebug.com