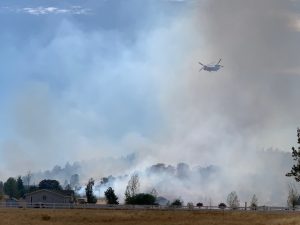 Update at 4:55 p.m.: PG&E is reporting that 117 customers are without power in the Jamestown area, where the Shell Fire broke out. Their lights went out around 3:15 p.m. a little bit after the fire ignited in some grass in the 18300 block of Shell Road near Rawhide Road in the Jamestown area of Tuolumne County. The utility, however, has stated that crews are investigating a cause and that the estimated repair time is 7:30 p.m. Further details on the blaze can be viewed below.

Update at 3:55 p.m.: CAL Fire reports that firefighters have stopped the forward progress of an estimated 15-acre vegetation fire in the 18300 block of Shell Road near Rawhide Road in the Jamestown area of Tuolumne County.

Evacuation advisories, meaning residents should be prepared to evacuate if ordered, remain in place for Rawhide Road to French Flat Road, Shell Road to Rawhide Mobile Home Park, and along Old Melones Dam Road. Also, Shell Road is closed. Sierra Waldorf School was evacuated and all the students were moved to Jamestown Elementary School off Highway 108 in Jamestown. Sheriff’s officials continue to ask the public to avoid the area as firefighters continue to work towards full containment. What ignited the fire is under investigation.

Update at 3:15 p.m.: CAL Fire has dubbed the blaze the Shell Fire, and it is estimated at five to ten acres in size. They noted the flames are burning in the grass along Shell Road near Rawhide Road and east of New Melones Lake in the Jamestown area of Tuolumne County.

The CHP reports that Shell Road is closed between Rawhide and Old Melones Road. Tuolumne County Sheriff’s officials have issued evacuation advisories for these areas:

Sheriff’s officials are asking the public to avoid the area and to be advised that travel on Rawhide Road may be delayed.

Original post at 2:55 p.m.: Jamestown, CA — Columbia aircraft and ground resources are heading to a vegetation fire along Shell Road in the Jamestown area of Tuolumne County.

A plume of smoke can be seen billowing into the skies east of New Melones Lake. CAL Fire reports the flames are burning in the grass along the 18300 block of Shell Road, between Rawhide Road and Old Melones Road. There is no word currently on the fire’s size, rate of spread, or whether any structures are threatened. An update will be provided as soon as new information comes into the newsroom.