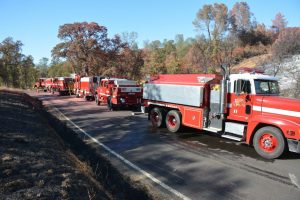 Moccasin, CA — Mop-up continues on the Marshes Fire burning near Moccasin. CAL Fire reports that the incident that ignited a week ago today is 1,080 acres and 90-percent contained.

At one point there were well over 1,000 fire personnel assigned to the incident, but the number is now down to 92. There are only two crews and two engines remaining on scene. Firefighters from over 100 different agencies, stretching across three states, helped extinguish the fire.

A vehicle parked alongside Marshes Flat Road in dry vegetation ignited the blaze at 12:20pm last Monday. CAL Fire has not given any indication as to whether the individual responsible could be charged with any offenses.

All earlier evacuation orders and advisories were lifted last week, and all roads nearby have reopened.