Mokelumne Fire Is Over 900 Acres 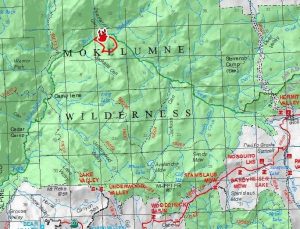 Alpine County, CA — There is a new size estimate for the Mokelumne Fire burning in the Stanislaus National Forest. An increase in acreage is due to better mapping as opposed to new growth over recent days, according to the Forest Service.

The fire is now estimated to be 905 acres and it remains 70% contained. Early yesterday morning the size estimate was around 650 acres. The fire was ignited by a lightning strike on August 18 and full containment should come by September 20. There remains 35 firefighters assigned to the incident, one helicopter and three hand crews. There have been two firefighter injuries reported. The forward rate of spread has stopped and the fire’s edge is confined within natural barriers.