A Couple of Wins And Losses 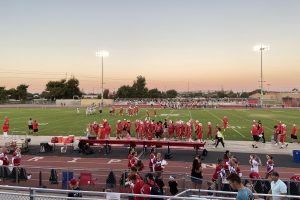 The Sonora Wildcats notched their first win of the season with a commanding performance on the road, defeating the Ripon Indians 42-10.

The Sonora defense began the game strong, forcing a 3 and out for Ripon on their first drive. The Wildcats wasted no time once the ball was in their hands, with a big 31-yard reception by senior wide receiver Chance Pimentel.  Junior running back Audie Peeples then ripped off a series of solid runs, including a 15-yarder for the first touchdown of the game. The next possession saw the Wildcat defense forced another three and out, followed by another Sonora touchdown drive.  This time it was junior running back Bryce Nicholson with the big catch and run, a 20-yard play to convert a crucial fourth down. The drive was finished off with a touchdown run by senior running back Noah Baker and a 2-point conversion on a dive by Peeples. The Sonora defense forced a third consecutive three-and-out and the Wildcats appeared to be marching towards a blowout after a 50-yard run from Baker took the ball to the Ripon 6-yard line. Ripon forced a turnover on a fumble on the next play and followed it up with a 78-yard touchdown run from Xzavier Clark a few plays later to bring the Indians within 8. That would be as close as Ripon got for the rest of the evening, as the next two Sonora drives both ended in touchdowns, including a score with 15 seconds left before the half. Nicholson and senior running back Cooper Moberg came away with touchdowns on the drives.

The second half was all Wildcats, as the offense continued to roll and the defense shut down any threat from the Ripon attack. Despite turning the ball over on their first possession of the half on a strip sack of junior quarterback Adam Curnow, the Wildcats built on their first-half lead. Chance Pimentel had a 94-yard touchdown run and catch for one touchdown, and Sonora effectively iced the game on a 60-yard run from Audie Peeples followed by a 20-yard touchdown run by senior running back Jack Teem.

The Wildcats move to 1-1 on the season and are at home next week to take on the Hilmar Yellowjackets. Chance Pimentel earned Chicken Ranch Casino Player of the Game honors for his 150+ yards receiving and a touchdown on the night. Junior defensive lineman Ryan Gibbs recorded the Foust Heating and Air “Hot Hit” of the game on a punishing tackle for a loss in the third quarter.

The Summerville Bears football team defeated the Dos Palos Broncos 34 to 28 last night, which gives them a 2 and 0 start to the 2022 season. A slow first quarter turned into a real barn burner as the night wore on and the Bears were able to outlast Dos Palos on the Broncos’ home field.

The Bears opened the scoring with a 32-yard pass from Braylon Leveroos to Dean Trimeloni, with Trimeloni kicking the extra point. Dos Palos scored to tie the game but in the last minute of the second quarter, Leveroos threw a second TD pass, this time to Auston Hike. With just seconds to go in the first half, it looked as if the Bears would go to the locker room with a seven-point lead, but looks were deceiving as Dos Palos returned the post-score kickoff 99 yards to tie the game at 14 to 14.

The action in the third quarter saw both teams score two TDs, but Summerville had an extra point blocked and they were unable to connect on a two-point conversion attempt, so the score after three quarters was 28 to 26 Dos Palos. The fourth quarter was a grind for both teams, and with four minutes left, the Bears were at a low point with a third and 17 deep in their own territory. Then Leveroos dropped back and, under pressure, threw a 40-yard strike to Trimeloni. This gave the Bears a burst of energy and three plays later, Leveroos ran it in from 25 yards to go ahead 32 to 28. A two-point conversion run by Kai Elkins finished the scoring for the night.

Braylon Leveroos earned player of the game by running 20 times for 111 yards and two TDs and completing 8 of 10 passes for 140 yards and another two touchdowns.

Summerville will play at home next week versus the Waterford Wildcats.

In other action, the Calaveras Redhawks played on their home turf but lost to the Carson Senators, 14-0. The team remains at home next Friday night to take on Ripon Christian. Bret Harte High School had a rare Thursday game and fell to the Golden Sierra Grizzlies, 21-7. The Bullfrogs have a bye week.