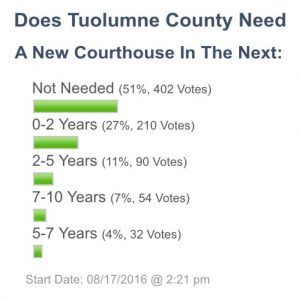 A summary of the informal MyMotherLode polls on various topics this week.

Starting on Thursday and running through the weekend until Monday MyMotherLode’s informal poll question asked “Does Tuolumne County Need A New Courthouse?” The options included ‘Not Needed’ which received just over half the votes, 51%. The rest of the answers were divided among how soon a Courthouse is needed. Immediately or in the next 2 years received 7% of the 488 votes between 2 and 5 years got 11%, 5 to 7 years got 7% and 7 to 10 years got 7% of the votes.

When construction will begin on a new Tuolumne County Courthouse is unknown as detailed in the news story here. The state Judicial Council met on August 25 and 26 to discuss requesting additional funding in the State Budget for Court Facilities.

An impressive 37% of MyMotherLode voters in an informal poll reported having boats and/or recreation vehicles. A canoe or kayak was most popular with 12% of 752 votes. A boat with an outboard motor also got aproximately 12% of the votes, just two less than those who have a canoe or kayak. A boat with an inboard motor only got 7%, pontoon received 3%, sailboat 2% and personal watercraft (Jet Ski) got just 1% or 8 votes.