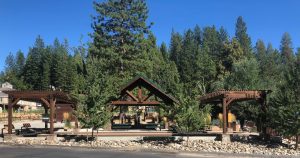 Twain Harte, CA– In 2017, a resident of Twain Harte donated a 1-acre downtown parcel to Twain Harte Community Services District (THCSD).  Work began on a project to transform that parcel into what would be known as Meadows Park. The final conceptual design was complete but funds were needed to complete the project.

THCSD announced that the State Department of Parks and Recreation awarded a $1,202,700 grant to THCSD for the construction of Meadows Park. The grant is through the competitive Proposition 68 Rural Recreation and Tourism Grant program, which offered $23.1 million for park projects across the state. Only 11 additional projects were chosen for this grant. This grant is in addition to the $3.75 million dollar grant through the State Water Resources Control Board’s Stormwater Grant Program. THCSD’s General Manager, Tom Trott expresses his thoughts on the project.

“The Twain Harte Meadows Park project not only represents the physical beauty of our mountain community, but it also represents the part of Twain Harte that makes it most charming – residents of all kinds happily working side by side, united by their common love for Twain Harte. It has been a joy working together to develop this dream and an honor working to obtain the resources to fund it. Now we get to share in the excitement of making the dream a reality!”

Meadows Park will be located next to Eproson Park in downtown Twain Harte. For more information on the park click here.