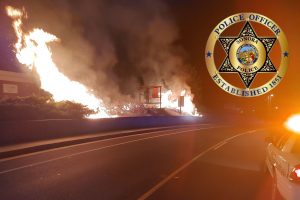 Sonora, CA – Sonora Police arrested a transient Jamestown woman for arson after officers viewed security camera footage during the time of the blaze near several businesses on Mono Way.

Last night, 46-year-old Nissa Marie Navone was handcuffed for allegedly setting a grass fire around 2:41 a.m. last Wednesday, August 17th, in the 100 block of Mono Way. Fire and police rushed to a report of flames on an embankment near the Mother Lode Jobs Training Center and Grocery Outlet. Fire crews were able to quickly extinguish the flames before they could possibly spread to surrounding structures. According to police, Navone was seen leaving the area at the time of the blaze, and video evidence confirmed that information.

Last night around 10 p.m., a TCSO Sergeant spotted Navone at a nearby shopping center and contacted police, who arrested Navone for arson.