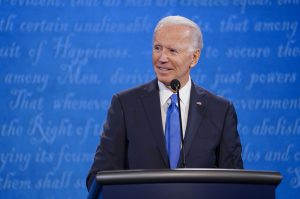 President Biden signed into law H.R. 5376, what is called the Inflation Reduction Act of 2022.

Biden was Monday’s KVML “Newsmaker of the Day”. Here are his words:

We’re in a session of — for a while, people doubted whether any of that was going to happen. But we are in a season of substance. This administration began amid a dark time in America — as Jim said, “a once-in-a-century pandemic” — devastating joblessness, clear and present threats to democracy and the rule of law, doubts about America’s future itself.

And yet, we’ve not wavered. We’ve not flinched. And we’ve not given in. Instead, we’re delivering results for the American people. We didn’t tear down; we built up. We didn’t look back; we looked forward.

Look, the bill I’m about to sign is not just about today, it’s about tomorrow. It’s about delivering progress and prosperity to American families.

It’s about showing the American and the American people that democracy still works in America — notwithstanding all the — all the talk of its demise — not just for the privileged few, but for all of us.

You know, I swore an oath of office to you and to God to faithfully execute the duties of this sacred office.

To me, the critical duty — the critical duty of the presidency is to defend what is best about America. And that’s not hyperbole. Defend what’s best about America. To pursue justice, to ensure fairness, and to deliver results that create possibilities — possibilities that all of us — all of us can live a life of consequence and prosperity in a nation that’s safe and secure. That’s the job.

And today is part of an extraordinary story that’s being written by this administration and our brave allies in the Congress.

This law — this law that I’m about to sign finally delivers on a promise that Washington has made for decades to the American people.

I got here as a 29-year-old kid. We were promising to make sure that Medicare would have the power to negotiate lower drug prices back then — back then — prescription drug prices.

But guess what? We’re giving Medicare the power to negotiate those prices now, on some drugs.

The Inflation Reduction Act locks in place lower healthcare premiums for millions of families who get their coverage under the Affordable Care Act.

Last year, a family of four saved on average $2,400 through the American Rescue Plan that I signed into law that Congress voted in place.

In the years ahead, thanks to the Inflation Reduction Act, 13 million people are going to continue — continue to save an average of $800 a year on health insurance.

The Inflation Reduction Act invests $369 billion to take the most aggressive action ever — ever, ever, ever — in confronting the climate crisis and strengthening our economic — our energy security.

It gives consumers a tax credit to buy electric vehicles or fuel cell vehicles, new or used. And it gives them a credit — a tax credit of up to $7,500 if those vehicles were made in America.

American auto companies, along with American labor, are committing their treasure and their talent — billions of dollars in investment — to make electric vehicles and battery and electric charging stations all across America, made in America. All of it made in America.

This new law also provides tax credits that’s going to create tens of thousands of good-paying jobs and clean energy manufacturing jobs, solar factories in the Midwest and the South, wind farms across the plains and off our shores, clean hydrogen projects and more — all across America, every part of America.

It includes ensuring that we create clean energy opportunities in frontline and fence-line communities that have been smothered — smothered by the legacy of pollution, and fight environmental injustice that’s been going on for so long.

And here’s another win for the American people: In addition — in addition to cutting the deficit by $350 billion last year, in my first year in office, and cutting it $1.7 trillion this year, this fiscal year, we’re going to cut the deficit — I point out — by another $300 billion with the Inflation Reduction Act over the next decade.

We’re cutting deficit to fight inflation by having the wealthy and big corporations finally begin to pay part of their fair share.

Big corporations will now pay a minimum 15 percent tax instead of us — five- — 55 of them got away with paying zero dollars in federal income tax on $40 billion in profit.

And I’m keeping my campaign commitment: No one — let me emphasize — no one earning less than $400,000 a year will pay a penny more in federal taxes. (Applause.)

Folks, the Inflation Reduction Act does so many things that, for so many years, so many of us have fought to make happen.

And remember: Every single Republican in Congress voted against this bill.

Every single Republican — every single one — voted against tackling the climate crisis, against lowering our energy costs, against creating good-paying jobs.

My fellow Americans, that’s the choice we face: We can protect the already-powerful or show the courage to build a future where everybody has an even shot.

And today — and today, we’ve come a step closer to making that America real.

Making progress in this country is a — as big and complicated as ours clearly is not easy. It’s never been easy.

But with unwavering conviction, commitment, and patience, progress does come.

Your dad was right.

And when it does, like today, people’s lives are made better and the future becomes brighter, and a nation can be transformed.

That’s what’s happening now. From the American Rescue Plan that helped create nearly 10 million new jobs, to a once-in-a-generation infrastructure law that will rebuild America’s roads, bridges, ports; deliver clean water, high-speed Internet to every American; to the first meaningful gun safety law in 30 years — and if I have anything to do with it, we’re still going to have an assault weapons ban, but that’s another story. And to get significant veterans’ healthcare law in decades, for the first time; to a groundbreaking CHIPS and Science Law that’s going to ensure that technologies and jobs of the future are made here in America — in America. (Applause.)

And all this progress is part of our vision and plan and determined effort to get the job done for the American people, so they can look their child in the eye and say, “Honey, it’s going to be okay. Everything is going to be okay.”

Everything is going to make sure that democracy delivers for your generation. Because I think that’s at stake.

And, now, I know there are those here today who hold a dark and despairing view of this country. I’m not one of them.

I believe to my core there isn’t a single thing this country cannot do when we put our mind to it. We just have to remember who we are. We are the United States of America.

And now I’m going to take action that I’ve been looking forward to doing for 18 months. (Laughter and applause.) I’m going to sign the Inflation Reduction Law. (Applause.)

(The bill is signed.)