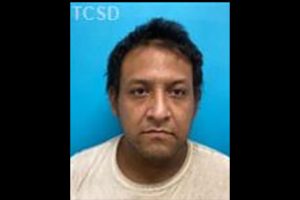 Tuolumne County, CA – A call to help a stuck pickup truck on Beardsley Reservoir Road off Highway 108 in Tuolumne County resulted in the arrest of two local men.

On Monday morning, a caller asked the Sonora CHP to help his friend whose truck was stuck in the mud. When CHP officers arrived, they found the driver, 36-year-old Joshua Lee Helsel of Copperopolis, whose truck and trailer were blocking the roadway. Then an officer noticed miscellaneous items inside the pickup, which included Boy Scout patches and a map of Camp John Mensinger, a nearby Boy Scouts of America camp. That piqued the interest of the officers, who also noticed that the trailer had numerous items on it that were suspected to be stolen property.

The officers called the Tuolumne Sheriff’s office for backup. Deputies went to the Boy Scout Camp and confirmed that six buildings had been burglarized. Sheriff’s spokesperson Sgt. Jacob Ostoich detailed, “Helsel admitted to burglarizing the camp and being under the influence of a controlled substance. He also made statements about having an accomplice, whom he identified as “Daniel.”

While returning to Sonora on the highway, a CHP officer saw a stranded motorist, 50-year-old Daniel Robert Vierra of Sonora, near Twain Harte, and pulled over to help. Sheriff’s units also responded to this scene. Sgt. Ostoich added that they determined that Vierra was the other individual who reportedly burglarized the camp with Helsel and had reported the stuck truck. Both Helsel and Vierra were taken into custody for felony burglary and criminal conspiracy.