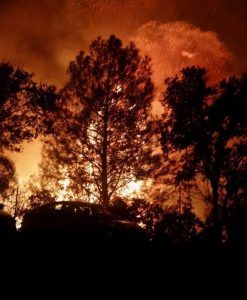 Update at 8:45am: Firefighters are calling this morning’s incident the “Peppery Fire,” as it was situated near Sullivan Creek in an area near the Peppery Restaurant and the new Chrysler, Dodge, Jeep, Ram dealership. CAL Fire spokesperson Lindy Shoff says initial estimates put the size at around 15-20 acres, but the current estimate is nine acres, due to better mapping. No structures were damaged.

Shoff says, “It is 90% contained and we have no injuries. We also understand there is some impact to the Sierra Railroad, but I don’t have any details at this time.”

13 engines are still assigned the incident, which ignited at 1:30am. Mop-up will continue throughout the morning. What exactly ignited the fire remains under investigation.

A special thanks to community news partner Zack Wagner for sending a photo. Other images were taken by the Tuolumne County Sheriff’s Office. Pictures can be emailed to news@clarkebroadcasting.com.

Original story posted at 5:50am: Sonora, CA — Firefighters have been on scene of an early morning fire that ignited in Sullivan Creek, right behind the new Sonora Chrysler, Dodge, Jeep, Ram dealership.

The fire ignited at 1:30am and has burned 15-20 acres of vegetation, according to latest estimates. It is 75% contained. There were no evacuations called for, and 13 engines remain on scene. There are no road closures, but use caution if driving in the area. No injuries have been reported. Officials are currently investigating what ignited the blaze. We’ll pass along more information when it becomes available.