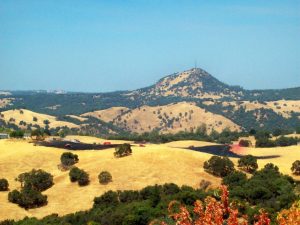 Update at 4:51 p.m.: CAL Fire spokesperson Lindy Shoff shares that investigators looking for the cause of the five-acre Center Fire in Mokelumne Hill are still calling it undetermined. The blaze ignited late in the one o’clock hour along highway 49 near Center Street.

News partner Dawn Ostrom shared some photos you may view by clicking in the left image box, including of the fire retardant streak that landed across the highway during firefighting efforts from the air. To share news photos with Clarke Broadcasting, please email them to news@clarkebroadcasting.com

Update at 2:07 p.m.: CAL Fire spokesperson Lindy Shoff says forward progress has been arrested, and air resources, along with some ground resources have been released. The vegetation fire that ignited late in the one o’clock hour on Highway 49 in Mokelumne Hill near Center Street is now described as five acres in size. No report on any structures being threatened. The CHP San Andreas Unit noted in its incident report that some fire retardant had splattered on part of the roadway near the blaze, so travel with caution and be aware of firefighting and clean up efforts in the area.

Update at 1:40 p.m.: Air and ground resources are working a vegetation fire now being described as two to three acres and moving at a moderate rate of spread, located near Center Street, across from the former Wendell’s restaurant. Although there are no details as to any structures being threatened, CAL Fire dispatch says the flames are moving toward Highway 49.

Original Post at 1:35 p.m.: San Andreas, CA — According to firefighters, air and ground resources are responding to a reported vegetation fire off Highway 49 in the Mokelumne Hill area.

It is described as being located near Center Street, across from the former Wendell’s restaurant. We will bring you more information as soon as it becomes available.