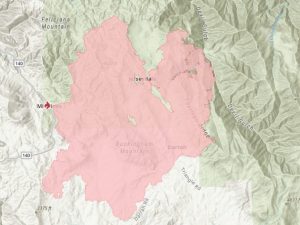 Mariposa, CA — Additional progress was made over the weekend in extinguishing the Oak Fire burning in Mariposa County.

It is 19,244 acres and 67- percent contained. A local assistance center will be open today through Wednesday, from 9am to 7pm, at the Mariposa High School. It is for anyone who experienced loss during the Oak Fire. At least 190 structures have been destroyed, according to CAL Fire.

Over the weekend, more of the evacuation orders were downgraded to advisories.  The only areas still under evacuation orders are the Sweetwater Ridge/Mine area, Feliciana Mountain Road, Ferguson/Apperson Mine Road area, Savage Lundy Trail, Footman Ridge area and Devils Gulch area.

CAL Fire has released the information below for anyone returning to an area that was earlier evacuated:

Although wildfire damage can be immeasurable, the danger is not over after the flames are put out. Flash flooding and debris flows, structural damage, road instability, and damaged trees are just some of the dangers that exist after a wildfire. Keep these tips in mind:

• Stay away from your home or business until fire officials tell you it is safe to return.
• Flash floods are a very real and potentially deadly hazard after a wildfire, particularly as a result of rain falling over a burned area upstream of your location. Stay away from burned forests, storm channels, and natural drainages (rivers, creeks, and engineered channels can convey deadly flows of water and debris, especially after a wildfire).
• Have a battery-powered radio to listen for emergency updates, weather forecasts,
• reports of flash flooding, and news reports.
• Have an evacuation plan in place and make sure all family members are familiar with it.
• Be aware of and use extreme caution around trees, power poles, and other tall objects or structures that may have lost stability during the fire. Most burned structures and surfaces will be unstable.
• Stay out of burned forests during windy conditions, as burned trees are easily downed by wind. Do not touch any power lines.
• Keep a “fire watch.” That means look for smoke or sparks throughout the house and on rooftops (e.g., in gutters), etc. Look for ash pits or hidden embers. Stay away – they can burn you.
• Before inspecting your home, first check for the smell of gas. Turn off power until you’ve completed your inspection. Use a battery-powered flashlight to inspect a damaged home. (Note: the flashlight should be turned on outside before entering. The battery may produce a spark that could ignite leaking gas, if present.)

• Do not drink or use water from the faucet until emergency officials say it is okay; water supply systems can be damaged and become polluted during wildfires or as a result of subsequent post-fire flooding. If your well has been damaged by fire, contact a local licensed and bonded well constructor or pump installer to determine the extent of the damage and what must be done to either repair or decommission the well.
• Discard any food that has been exposed to heat, smoke, flood waters, or soot.
• Utilities: If there is no power, check to make sure the main breaker is on. If the breakers are on and power is still not present, contact the utility company. If you have a propane tank or system, contact a propane supplier, turn off valves on the system, and leave valves closed until the supplier inspects your system. If you have a heating oil tank system, contact a heating oil supplier for an inspection of your system before you use it. If you have a solar electrical system, this system should be inspected by a licensed technician to verify that the solar panels and electrical wiring are safe for continued operation.