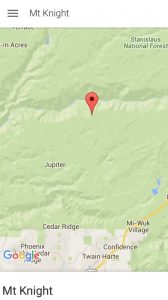 Update at 12:45 p.m.: Benaiah Tindell, the 20-year-old Twain Harte man who was missing for five days along with his dog are rescued and resting  comfortably.

Just before 8 a.m. this morning, search and rescue personnel and air resources with the help of friends and family located him. Sheriff’s Office spokesperson Sgt. Andrea Benson reports that Tindell was transported by helicopter to Columbia airbase and then taken by ambulance to Sonora Regional Medical Center. His dog is now with family. Tindall is reportedly very dehydrated and weak following his ordeal, also suffering from minor cuts, scrapes and bruises. He was located stuck in steep treacherous brush-covered terrain about 30 minutes in from where he left his truck on a riverbank near Mount Knight in the Jupiter area.

Update at 8:45am: The Tuolumne County Sheriff’s Office reports that a 20-year-old Twain Harte man has been located and is safe. Sheriff’s Office spokesperson Sgt. Andrea Benson says, “Before 8am this morning they located Benaiah Tindell. His friends went out throughout the evening and assisted in locating him. Search and rescue crews, with help from a helicopter, are working on the rescue as we speak.”

No further information is immediately available, but we’ll pass along more details when they are released.

Original story posted at 6:25am: Twain Harte, CA — The search continues today for a Twain Harte man that left his home late last week in the area of Mt. Knight in the Jupiter area.

20-year-old Benaiah Tindell was believed to have left with his dog to go camping and fishing on Thursday. The Stanislaus County Sheriff’s Office Search Team and a National Guard Helicopter will join the efforts this morning. We reported previously that Tindell was last seen leaving his Twain Harte area home on Thursday morning with water and fishing poles before heading out on his trip. Sgt. Benson indicates that a family member found Tindell’s truck parked in the Mt. Knight area on a forest road along with a single shoe discovered by a river. She also states that he is reported to have mental health issues and does not have his medication.

Sheriff’s officials describe Tindell as being 5’10”, 160 lbs., brown hair, and blue eyes. Anyone with information on Tindell’s whereabouts is asked to please call the Sheriff’s office at 533-5815.