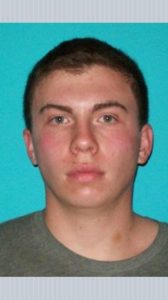 Twain Harte, CA – With a CHP helicopter in the sky over the Twain Harte/Jupiter area, Tuolumne County Search and Rescue continue to scan the Mt Knight area for 20-year-old Benaiah Tindell.

Spokesperson Sgt. Andrea Benson reports that Tindell went fishing last Thursday and has not been seen since. She adds that Sunday morning his cell phone showed data usage but it is unclear whether it was automated or actual use. His family told sheriff’s officials that Tindell is familiar with the area.

The search for Tindell began Saturday after a family member notified sheriff’s officials that he had not returned home from camping. He left his Twain Harte home on Thursday morning with water and fishing poles before heading out on his trip. Sgt. Benson indicates that a family member found Tindell’s truck parked in the Mt. Knight area on a forest road along with a single shoe discovered by a river. She also states that he is reported to have mental health issues and does not have his medication.

Sheriff’s officials describe Tindell as being 5’10”, 160 lbs., brown hair, and blue eyes. His picture is in the upper left-hand image box. Anyone with information on Tindell’s whereabouts is asked to please call the Sheriff’s office at 533-5815.