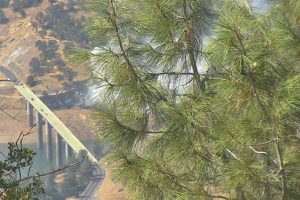 Fire near the Jacksonville Bridge in the Lake Don Pedro area

Update at 4:40 p.m.: CAL Fire reports that firefighters have stopped the forward rate of spread of a vegetation fire burning near Lake Don Pedro in Tuolumne County. They detail that the fire, burning in some grass under the Jacksonville/Don Pedro Reservoir Bridge on Jacksonville Road near Highways 49/120 and the Moccasin Point Marina,  is estimated at about an acre in size. All Columbia aircraft have been called back to base and all but two engines remain on scene. Those crews will work to gain full containment and mop up for the next couple of hours. What ignited the fire is under investigation.

CAL Fire relays that callers report a fire is burning in some grass under the Jacksonville/Don Pedro Reservoir Bridge on Jacksonville Road near Highways 49/120 and the Moccasin Point Marina. They say that the blaze is one acre in size and moving at a slow rate of spread. Currently, no structures are threatened and Jacksonville Road is not closed.  An update will be provided as soon as new information comes into the newsroom.