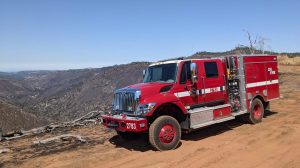 Amador County, CA — The Electra Fire ignited on July 4 and burned 4,478 acres near the border of Amador and Calaveras counties.

The fire is now 100 percent contained and cleanup efforts are underway. It ignited in the Electra Day Use, also known as Vox Beach. PG&E reports that there are numerous hazard trees that need to be removed so the area is temporarily closed, effective yesterday. An official reopening date has not been announced, but PG&E spokesperson Megan McFarland reports that it will likely be sometime around August 13.

Vox Beach is a popular area during the summer months.

The closure is due to public safety concerns. Crews will be using heavy equipment, chippers, and chainsaws to remove the trees.